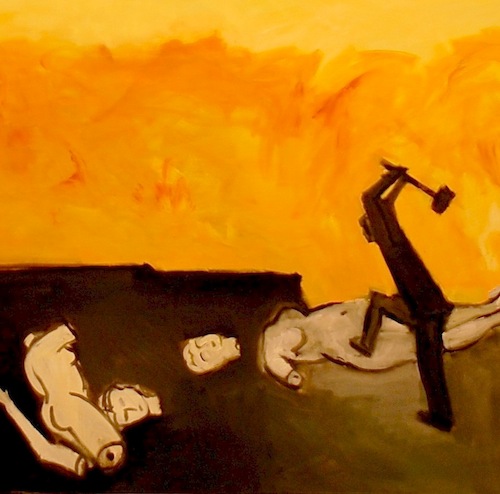 The Divine imperative underlies, indeed propels, the entire narrative of Abraham, Sarah and Hagar. God commands and tests our beloved protagonists. They must carefully parse His words and figure out what exactly He wants of them. It is their earnest reactions and the effects those actions have on those around them that fuel our stories and lay the foundation for generations of conflict, strife and commentary.

Why is Abraham and Sarah’s marriage so dysfunctional?  Driven by famine from the promised land to Egypt, Abraham suddenly becomes aware of her incredible beauty and can only see her as a liability to his personal safely. His reaction is to expose her to the wiles of a rapacious Pharaoh.  She is almost raped.  Some 25 years later he does the same thing, trying to pull off the “Sister Act” with the equally dangerous king of the Philistines, Avimelech. His callousness does not improve with age. When he is told she will miraculously have a child at the age of 90, he doesn’t share the good news.  When that child is finally an adult, he blithely runs off one morning to sacrifice him at God’s command. Once Sarah finds out, the shock kills her.

How could the founder of monotheism, our forefather so deeply associated with kindness and charity, be so callous to his own wife?

In these paintings I begin to uncover the mystery. It is all bound up in the prequel, the midrash of Abraham’s initial discovery of God. Smashing Venus shows Abraham asserting monotheism over polytheism but with a twist. It is the goddess, the primitive sensual feminine, which must be destroyed.  In the ancient world the goddess reigned supreme, the dangerous rival of the non-gendered transcendent God. For Abraham the goddess was the enemy and in his passionate faith he could not see the beauty and inherent value of the feminine in his own wife.

Sarah’s steadfast faith and loyalty is expressed as she takes it upon herself to solve the problem of her barrenness. How can Abraham father a people as commanded by God if his wife is childless? Therefore she gives her Egyptian slave to Abraham in an attempt to bear children for the Abrahamic line. What selfless love, what heartfelt attempt to accomplish the Divine imperative. Practically before the words are out of her mouth she realizes how painful this ploy is. In an attempt to fulfill God’s will she has introduced a young pagan into her sacred marriage bed. And Abraham doesn’t hesitate a moment.

Sarah’s gambit is finally played out when the three strangers drop in to tell Abraham that Sarah will miraculously have a child in the year to come. She finally realizes that the Hagar option, personified in the troublesome Ishmael, will not fulfill God’s plan.  She laughs at her own folly.

Once Sarah has more than done her wifely duty, bearing a child at an unnatural age and raising and protecting the heir to Abraham’s knowledge, faith and courage she is cruelly abused once again. God introduces a new imperative, a final test of the faithful Abraham. Abraham unblinkingly complies and sneaks off early in the morning, abandoning a bewildered Sarah alone in her marriage bed. Once the adventure is revealed she cries out and dies. Finally, perhaps, Abraham realizes what he has lost and mourns his wife Sarah.

In the final chapter Abraham secures a child-bride for their son Isaac, awakening a desire to return to normalcy in his own life. Shockingly, he returns to Hagar and fathers another six children in his very old age. It feels like the ultimate betrayal of Sarah to bed down with the woman who caused Sarah so much pain and anxiety. Sarah’s rival has returned to rule triumphantly in Sarah’s own home. It is inescapable, Sarah’s Trials ends as a tragedy.

Abraham and Sarah are at the beginning of a very long road wherein God acts, commands and tests His human creations. We all struggle to understand His will and maneuver as best we can to act decently in God’s world and well as ours. For us Sarah’s trials are a cautionary tale of the age-old human condition.