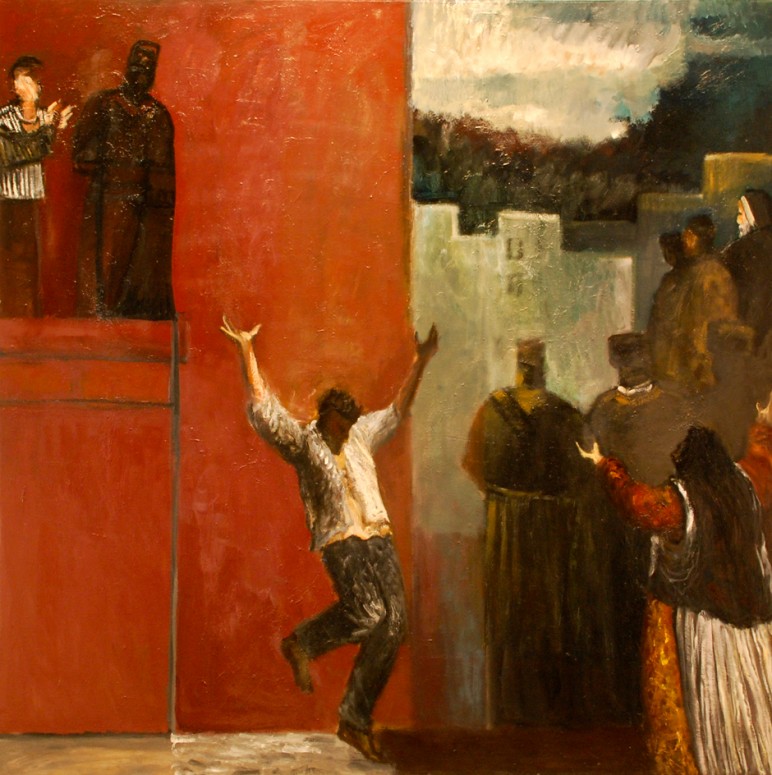 David Dancing Before the Ark of the Covenant

13 And it was so, that when those who carried the ark of the Lord had gone six paces, he sacrificed an ox and a fatling. 14 And David danced before the Lord with all his might; and David was girded with a linen ephod. 15 So David and all the house of Israel brought up the ark of the Lord with shouting, and with the sound of the shofar. 16 And as the ark of the Lord came into the city of David, Michal, Saul’s daughter, looked through a window, and saw king David leaping and dancing before the Lord; and she despised him in her heart. 17 And they brought in the ark of the Lord, and set it in his place, in the midst of the tabernacle that David had pitched for it; and David offered burnt offerings and peace offerings before the Lord. 18 And as soon as David had finished offering burnt offerings and peace offerings, he blessed the people in the name of the Lord of hosts. 19 And he distributed among all the people, among the whole multitude of Israel, as well to the women as men, to every one a cake of bread, and a good piece of meat, and a flagon of wine. So all the people departed every one to his house. 20 Then David returned to bless his household.

And Michal the daughter of Saul came out to meet David, and said, How glorious was the king of Israel today, who uncovered himself today in the eyes of the maidservants of his servants, as one of the low fellows shamelessly uncovers himself!

21 And David said to Michal, It was before the Lord, who chose me before your father, and before all his house, to appoint me prince over the people of the Lord, over Israel; therefore will I play before the Lord. 22 And I will make myself more contemptible than this, and will be abased in my sight; and of the maidservants which you have spoken of, of them shall I be held in honor. 23 And Michal the daughter of Saul had no child to the day of her death.