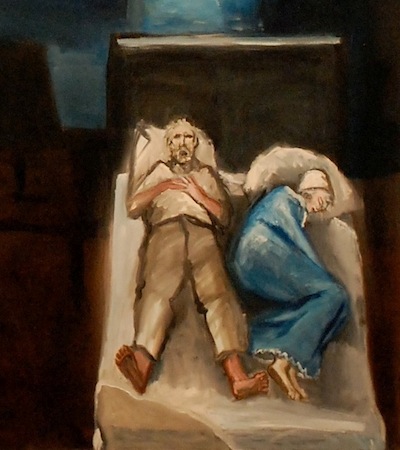 The curtains have parted, the orchestra has forewarned us of an impending tragedy; the characters take their places center stage to interact with each other in a story that is well known to the audience. But like a great opera, it is the music, the scenery, the acting, and the nuances that blend to enhance and dramatize the plot. The first and continuing impact of Richard McBee’s epic series of paintings of the complete history of the biblical Sarah is of an opera on a grand scale.

As she is depicted in the Talmud and interpreted through the eyes of artists, Sarah appears a somewhat two-dimensional figure, standing in the shadows, dominated by powerful, iconic, male figures. McBee has challenged that by offering Sarah in all of her potential energy and “speaking” in the first person. In previous works McBee devoted himself to examining the many aspects, moods and attitudes of Abraham and his relation to God. Again and again, returning to the subject of the Akeidah, the Binding of Isaac, and the commitment to God’s commands, McBee reached deeply into the text and the midrashic interpretations of the events. He came to realize that a key component of the story was the role of Sarah, how she responded to situations, and how, in many of the crucial scenes of Genesis it was Sarah who was at the center of the event.

Sarah’s Trials is a series of eight diptychs, and although they easily stand alone as sixteen individual paintings, they form a heightened narrative when paired.  The biblical text is taut and spare and McBee returns us to the expanded versions that would have been inherent in an oral tradition. The first scene is of father and son standing outside the family business. Terach, Abraham’s father, was a craftsman who made idols…. female goddesses, fertility symbols. In the second scene Abraham, having heard the voice of God, destroys these clay figures. There is a surreal quality to these images, a vast sky with bands of color rising from ochre to pale yellow to a limpid blue, suggesting endless new possibilities. This is contrasted with the idol shop in the first scene in which the background is reminiscent of an archeological site implying the dusty past, the collapsed city of Babel bringing to mind the paintings of Giorgio de Chirico

Paintings three and four, the second diptych, pull us into the midst of a violent episode. Forced to leave Haran, passing through Canaan and seeking respite from famine, Abraham and Sarah arrive in Egypt. There, Abraham realizing how strikingly beautiful she is, reverts to a subterfuge and passes Sarah off as his sister. Had she been perceived as his wife, Abraham feared that he would be killed and Sarah taken as a hostage for the Pharaoh’s harem. Attempting to hide in a box/trunk, Sarah is discovered. The ploy worked, Abraham is gifted with riches by the Pharaoh but Sarah is still in jeopardy. In scene four Sarah is saved by an angel who punishes Pharaoh for attempted rape and adultery. Pharaoh, or Avimelech, is confronted with a “whip” angel as Sarah discreetly shields herself. In this scene the sky darkens with brooding clouds and the building silhouette suggests opulence and power. Pharaoh is garbed in a dinner jacket, Abraham, in contrast, is dressed like an unsophisticated student. They are guarded by uniformed “toy” soldiers. The broad stage apron on which these scenes are played out isolates the figures and the stringent delineation of the background reference the works of Max Beckmann, modern and unyielding.

Since this is Sarah’s story, we leap over several years and find Sarah, seemingly barren, concerned that her inability to conceive and bear a child would negate God’s promise to Abraham that he would father a powerful nation, Genesis 13:16. She therefore develops a strategy, offering Hagar, her Egyptian maidservant, as a concubine to provide Abraham with the promised heir.  In paintings five and six, Abraham, now fashionably dressed, eagerly takes Hagar into his chamber, while Sarah, aging before our eyes, sits in isolated loneliness. Scene five is depicted against a lowering, limitless sky. In the sixth painting Sarah is depicted in an old fashioned, dowdy garment, folded into herself, thinking of her rash gesture. Hagar, long legged, mini skirted and wearing dark glasses is a vision of contemporary youth and glamour. The ominous weight of the brooding, polarized figure of Sarah foreshadows event to come.

In episodes seven and eight we are encouraged to take a deep breath. There is no tension in these two scenes. Washed with a honey toned light, Sarah is seen in her rightful role as matron of a comfortable establishment. The panels of windows at the top of each of these paintings compress the space and Sarah seems larger and more dominant than in the previous episode. Bracketing the diptych, she stands on either side of the paintings and  in the foreground, larger than any of the other figures, the center of their attention. The enigmatic figure in the eighth painting is Ishmael, standing between Sarah and Abraham. Sarah closeted in her house, begins to regret her urging of Hagar on Abraham.

Consider the placement of Sarah in paintings nine and ten. She is at the top of a grand staircase, towering over Hagar, in charge of her family. The tropical sea tones of the background isolate each woman. Sarah assumes her role as the matriarch and Hagar is banished. Storm clouds gather.

The sixth pair is the dramatic turning point of the story. Dark skies, an estranged couple, tension, Abraham listening to the voice of God, Sarah abandoned. She wakes in the early dawn, to the absence of both husband and son. The pace of the drama accelerates and in the seventh pair, the terrible culmination of Sarah’s life. All is grey, flat, severe and final. McBee puts himself into the mind and emotions of Sarah, the horror of the attempted sacrifice and presumed death of her only son. She is literally lifted off her feet in shock and agony and dies.  Abraham mourns, sitting shiva on a low bench. The tree in leaf glimpsed behind a high wall in painting thirteen is reduced to barren twigs in the fourteenth image.

The final set of paintings rapidly resolves the events, perhaps too quickly and too neatly. Sarah is buried “offstage.” Isaac is given Rebecca, a child bride and Abraham, alone for the first time in eons, takes another wife. It is Keturah/Hagar, identified by her sexy yellow dress and sunglasses. Bright sunshine suffuses the scene which includes the graveyard where Sarah lies buried and a grove of flourishing trees, symbolic of Abraham’s virility.  The structure of a repeated setting recalls the work of Richard Diebenkorn.

Sarah’s entire history, from the point of view of an individual person, has never been attempted prior to this. One might view this work as a whole unit rather than a series of episodes. In this cautionary tale, McBee pits those prophetic humans to whom God spoke directly with those who interpreted and acted. The artist has placed the events in the present, with no trace of an archaic voice.

Artists of the past have dealt with only a handful of specific moments of Sarah’s life, dressing her in ancient garments. Marc Chagall‘s epic Bible, depicts only three moments of Sarah’s life. Most artists have chosen the visitation of the Angels and Sarah’s hospitality conveniently keeping her well in the background. Even Rembrandt van Rijn hides Sarah in dark shadows. All previous artists have ignored another interpretation of the narrative, that of Sarah attempting to fulfill God’s promise.

Much of McBee’s interpretations are stimulated by midrash but in this series he has crossed the line, and has endeavored to see Sarah’s story from her unique point of view, a male artist attempting to speak in Sarah’s voice. As the curtain comes down we begin to feel the tragedy of her life. And for now, she has been finally heard.