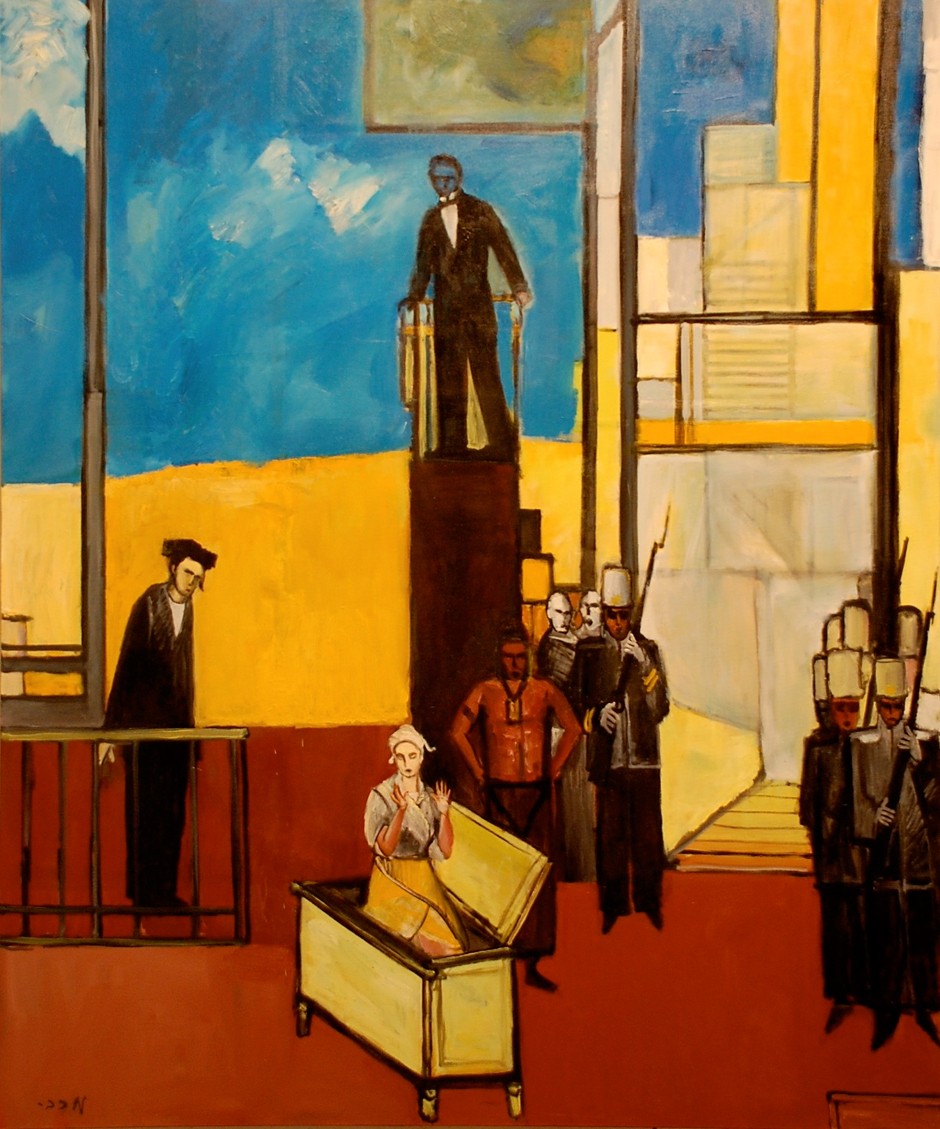 God commands Abraham to sacrifice his son Isaac, Sarah’s only child. Our forefather gets up early and obeys, not telling Sarah his wife of 47 years. According to Rashi (Genesis 23:2) when she finds out about this, she dies of shock. This has always disturbed me.  Upon reflection other things about their relationship seemed problematic.

Abraham passes Sarah off as his sister to protect himself, once, and then again 25 years later, both times exposing her to danger. This never seemed evidence of an ideal loving couple. Ramban (Genesis 12:10) commented that this act of betrayal and lack of faith fated Abraham’s descendants to be enslaved in Egypt.

Even Sarah’s initially selfless act of ordering Hagar to act as a surrogate and bear Abraham’s child turned terribly sour.  Once her scornful maidservant is pregnant Sarah oppresses her so severely that Hagar’s descendants will cruelly oppress Jews whenever they have a chance. So says the Ramban (Genesis 16:6). There is more.

God tells Abraham that Sarah will miraculously have a child, an heir to his wisdom, at the age of 90. He doesn’t bother to tell her. Later when she overhears this news from the three mysterious strangers, she is incredulous, incurring Divine displeasure. All in all it doesn’t add up. Why do our blessed First Family act so egregiously toward each other and their household? What is going on here?

To find some answers I started a series of paintings called “Sarah’s Trials.” For over two years I worked on this series of 16 paintings, each six by five feet. They are currently on exhibit at the JCC Manhattan on Amsterdam Avenue & 76th Street until October 28 [2010]. I struggled to understand the narrative from Sarah’s point of view, to give Sarah a clear voice in what happened to her. I discovered a lot about our forbearers. I would like to share some of my insights with you.

First of all the biggest question; why doesn’t Abraham recognize the beauty and worth of his wife Sarah? I think I have a clue in the famous midrash (Midrash Rabbah, Genesis 11:28) that tells of Abraham smashing the idols in his father’s idol shop. Upon seeing an illustration of that episode in the 1710 Amsterdam Haggadah it struck me that the idols that Abraham was most likely destroying were of the image of Venus, the female goddess.

Now it all started to make sense! In Abraham’s world, the worship of the goddess reigned supreme and posed the greatest challenge to the new God Abraham had discovered; a god with no gender, invisible and transcendent. But this struggle, reflected in the midrash, also rendered Abraham myopic to his beautiful and pious wife. In the paintings of the Idol Shop and Smashing Venus an ancient pagan temple is in the background and a selection goddesses; Venus di Milo, Venus of Willendorf, Hindu goddesses and even a Madonna and child, are arranged for sale. These are the real enemies of our forefather.

In the next two paintings, (the 16 works are arranged as diptychs or pairs), Sister Act – Entering Egypt and Whip Angel Defends Sarah from Pharaoh we first see Sarah in a box, innocently surprised at finding herself surrounded by Pharaoh’s soldiers, the customs inspector and Pharaoh himself. Off to the side is the pious Abraham, a clueless Hasid, helpless to save his beautiful wife. In the next painting Sarah’s most terrible moment is depicted. The only way Sarah can defend herself against the rapacious Pharaoh is by imploring God to help her. And, according to the midrash (Midrash Rabbah: Genesis 12:15-17), God promptly sends “an angel… with a whip in his hand; when she ordered, ‘Strike,’ he struck and when she ordered, ‘Desist,’ he desisted.” Set in a starkly modern apartment, Sarah is saved by God’s righteous mercy from Abraham’s foolish machinations.

Sarah understood well the Divine imperative that Abraham was the forefather of a chosen people. And yet she remained barren. She must do something. We see next Abraham Taking Hagar, a young, sleek vision in a yellow dress. Sarah is shocked that Abraham doesn’t hesitate, doesn’t protest the complication introduced into his sacred marriage. In Sarah’s Despair, Sarah is devastated by the apparent destruction of her marriage.

Sarah suffered for years with the humiliation of barrenness in the face of Abraham’s new “wife” Hagar and their rambunctious son, Ishmael. Suddenly three strangers arrive and announce that she will miraculously finally have Abraham’s child at the age of 90! When they appear Abraham orders her to prepare food and greet them, as if she hasn’t been doing this her whole life, welcoming guests into their home. It’s insulting.

Finally, she hears the amazing news and laughs. The painting shows Abraham trying to comprehend what has just been said and Sarah, in the right foreground, smiling alone. Between them is a mysterious dark figure. He is none other than Ishmael. He is the one whom, for better or worse, Sarah had thought could be Abraham’s heir. And now she knows she was mistaken. Her laugh is not about God’s ability to perform miracles; rather it is an inward embarrassment at a misguided plan to fulfill the divine imperative.

The next diptych envisions Sarah as she exercises the little power she has in her marriage. In Hagar is Expelled, Sarah stands at the top of a grand staircase and threatens as Hagar, pregnant, but still spoiled with matching luggage and fashionable broad brimmed hat, is about to flee from her mistress’s wrath. While distant in chronology but close in theme, Hagar and Ishmael are Expelled similarly finds Sarah at the top of the stairs, here protecting her beloved family, Abraham and the young Isaac. Down below is Hagar, still in her signature yellow dress, twisting indecision and hesitation as her wild son Ishmael strides off crushed by the rejection of his father and only family. An eclectic field of mosaic–like collage effects the transition between mistress and expelled slave family.

In these narrative paintings of “Sarah’s Trials” frequently the silent gaps are as important as the explicit images. The Akeidah is central to the story of Abraham and Sarah and yet here only the very beginning is depicted in Abraham Hears God. A modernist bedroom with vast windows reveals Abraham and Sarah in bed together. It is just before dawn, Sarah is sleeping and Abraham hears a divine voice. What will he do?

In the next painting Sarah is suddenly alone, sitting up at the edge of the bed. Light is slowly filling the room but her anguish over her missing husband and son is obvious. How long will she have to wait until she learns the fate of her only son?

Immediately, we see Isaac Returns, in a side courtyard of the family compound. Isaac appears ghostlike and Sarah is thrown off her feet, shocked by the news of his pious adventure. She falls backward. Next is the tragic consequence, Abraham mourning next to the plain pine coffin of Sarah. Everything seems barren and hopeless.

But the Abrahamic narrative must go on, Abraham must find Isaac a wife and so he does. Isaac returns with a child-bride.  Abraham is startled from his mourning, stimulated to find a companion in his old age.

The last image is suffused with a yellow light, announcing the advent of Hagar’s world. Abraham returns to Hagar, after Sarah’s tragic death, and he now looks hesitantly at the graveyard where she is buried. But still he returns to Hagar, in some ways his old love, the woman who gave him his first child. Seeing this through Sarah’s eyes it is the ultimate betrayal with the woman who caused her such pain and anxiety; Sarah’s story ends as a tragedy.

I did not intend to paint a tragedy, only a serious examination of our beloved matriarch. But the narrative texts and the paintings as they developed took me there. I now know a bit more about this troubled first family, struggling to find their way to do God’s will. Sarah’s courage, determination and strength are remarkable and finally I am beginning to hear her voice. In the end, it was good to finally meet her.